Edit: this was an April Fool post of course, thanks you all for not disclosing it too early!

Alright, we wanted to announce it for sooooo long, but today we can officially shout about it: Dragon Bros will support VR! We have finally nailed the correct way to do it and ported the game to the Oculus Rift last week.

For those of you who haven’t heard about Oculus Rift, it’s a virtual reality headset that got bought by Facebook some time ago. And it’s awesome! 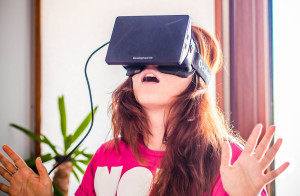 Sony, Microsoft and smaller players have also announced their own VR headsets and we hope to support as many as possible.

In the meantime, Marco is still drawing incredible enemies. And we can’t resist to show you the progress on the last one, a giant mech we love to call the “Metallic Michael Jackson” (an awesome bug used to make it walk backward, as if moon-walking!) :

The biggest difficulty was to find a way to keep the 2D feeling in a 3D world, where the player can turn his head and see the side of our sprites. So we reticulated the orthogonal billboard that we use as our classic screen projection plane, and babaaaam that was it! 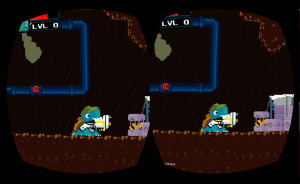 A quick glance at what it looks like eventually

We were really worried about loosing our pixel perfect display as well, but it actually looks really good. In fact, it feels even more like those old games we played on cathode tube TV as kids: the distorting lenses slightly blur the pixels edges and saved us the need for a specific camera effect shader (at least in VR, we’ll still have to do it on classic screen!)

Because Dragon Bros is a fun local multiplayer game first and foremost, we had to come with a way to allow two players to play at the same time. We thought about connecting 2 Oculus Rift to the computer, but it has two main issues:

So we came up with a crazy idea: what if players could share the headset? After all it’s got two screens (one per eye). So we tried it, and it works! It feels a bit cozy, which will be awkward for sure when you play with your mom. Though it could be a cool trick to get closer to your secret love! 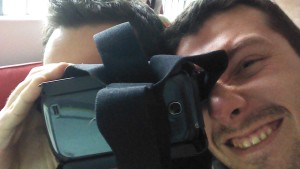 The biggest challenge we face now is that on Occulus, every player has his own camera, while on flat screen they share a unique camera. The consequence in term of gameplay are quite high, but I am sure we can make it!